Pioneer 10 in the house! 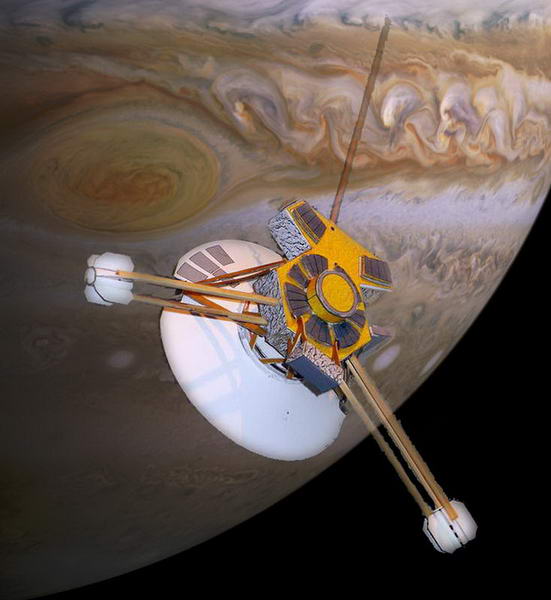 These are the voyages of the probe named Pioneer 10, which has decided to come back from his long trip in the outer Solar System and pay a visit at my house, where it's going to stay for a while..

Since when I was a kid I was fascinated by astronomy, science, and science fiction.  NASA is one of the first acronyms I learnt... And many memories of my childhood and youth are about events related to space exploration.   I still remember my mum taking me out on the balcony in a hot night of july saying "look at the moon, can you see a little black spot moving on the surface ?  that's a man walking on it".

After more than 30 years, it appears the venerable Pioneer 10 spacecraft has sent its last signal to Earth. Pioneer's last, very weak signal was received on 23 January 2003. NASA engineers report that Pioneer 10's radioisotope power source has decayed, and it may not have enough power to send additional transmissions to Earth. NASA's Deep Space Network (DSN) did not detect a signal during a contact attempt on 7 February 2003. The previous three contacts, including the 23 January signal, were very faint, with no telemetry received. The last time a Pioneer 10 contact returned telemetry data was 27 April 2002.
One final attempt was made to locate Pioneer's 10 signal on March 3-5, 2006 but failed to receive a response detection of a carrier signal from the spacecraft.
Launched on 2 March 1972, Pioneer 10 was the first spacecraft to travel through the Asteroid belt, and the first spacecraft to make direct observations and obtain close-up images of Jupiter. Famed as the most remote object ever made by man through most of its mission, Pioneer 10 is now over 8 billion miles away. (On 17 February 1998, Voyager 1's heliocentric radial distance equaled Pioneer 10 at 69.4 AU and thereafter exceeded Pioneer 10 at the rate of 1.02 AU per year.)
Pioneer 10 made its closest encounter to Jupiter on 3 December 1973, passing within 81,000 miles of the cloudtops. This historic event marked humans' first approach to Jupiter and opened the way for exploration of the outer solar system - for Voyager to tour the outer planets, for Ulysses to break out of the ecliptic, for Galileo to investigate Jupiter and its satellites, and for Cassini to go to Saturn and probe Titan. During its Jupiter encounter, Pioneer 10 imaged the planet and its moons, and took measurements of Jupiter's magnetosphere, radiation belts, magnetic field, atmosphere, and interior. These measurements of the intense radiation environment near Jupiter were crucial in designing the Voyager and Galileo spacecraft.
Pioneer 10 made valuable scientific investigations in the outer regions of our solar system until the end of its science mission on 31 March 1997. The Pioneer 10 weak signal continued to be tracked by the DSN as part of an advanced concept study of communication technology in support of NASA's future interstellar probe mission. The power source on Pioneer 10 finally degraded to the point where the signal to Earth dropped below the threshold for detection in 2003. Pioneer 10 will continue to coast silently as a ghost ship through deep space into interstellar space, heading generally for the red star Aldebaran, which forms the eye of Taurus (The Bull). Aldebaran is about 68 light years away and it will take Pioneer over 2 million years to reach it.
Launched on 5 April 1973, Pioneer 11 followed its sister ship to Jupiter (1974), made the first direct observations of Saturn (1979) and studied energetic particles in the outer heliosphere. The Pioneer 11 Mission ended on 30 September 1995, when the last transmission from the spacecraft was received. There have been no communications with Pioneer 11 since. The Earth's motion has carried it out of the view of the spacecraft antenna. The spacecraft cannot be maneuvered to point back at the Earth. It is not known whether the spacecraft is still transmitting a signal. No further tracks of Pioneer 11 are scheduled. The spacecraft is headed toward the constellation of Aquila (The Eagle), Northwest of the constellation of Sagittarius. Pioneer 11 will pass near one of the stars in the constellation in about 4 million years. 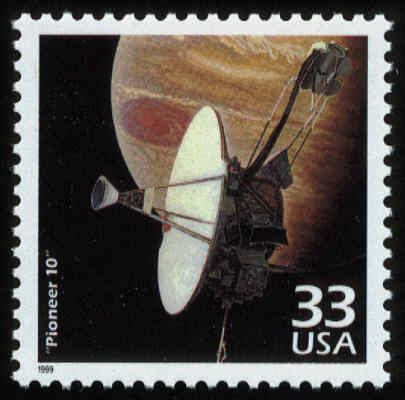 Commemorative stampThis mission of the Pioneer 10 and it twin probe Pioneer 11, has always fascinated me; the first mission to the outer planets, projected to leave the Solar System carrying a plaque of of gold-anodized aluminium, show the nude figures of a human male and female along with several symbols that are designed to provide information about the origin of the spacecraft.

What attracted me since from the beginning of this mission was that the probe was to fly really close by the giant Jupiter, and also Saturn for Pioneer 11, which would mean to finally get to see really detailed pictures of the planets, and not just the blurred small poor quality ones taken by even the biggest telescope on Earth.  Later on, Hubble was a huge innovation in the space observation made with telescopes, being able to observe and take pictures of the Solar System and deep space objects without being affected by the distorting filter of the atmosphere, therefore being able to take crispy clear pictures, but at the time the gap between what we had in terms of images about the outer planets and what was being expected from the Pioneer probes was huge.

Documents included in these webpages - Disclaimer

Most of the documentation that is shown in my webpages about the Pioneer mission is taken from the webiste of the National Aeronautics and Space Administration.   This is possible because, as they declare in their policy pages, their material is not protected by copyright (unless clearly stated) and therefore "may be reproduced and distributed without further permission from NASA".

Some parts of the article are taken from Wikipedia, where they are distributed under conditions that allow redistribution of the content.

...as I hammered in the last bolt and staggered over the rim, it was not at all clear to me who was the conqueror and who was the conquered. I do recall that El Cap seemed to be in much better condition that I was. Warren Harding