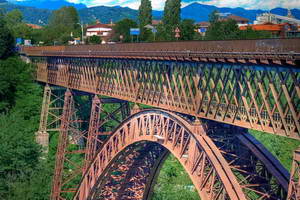 Built in 1887, the bridge structure has been used in the movie "Cassandra Crossing" (the scenes were shot using the french bridge), where it is depicted unused and derelict for 30 or 40 years, considered dangerous, to the extent that people living nearby moved away fearing it could collapse.

In 1964, French director Henri-Georges Clouzot shot The Inferno (L'Enfer) starring Serge Reggiani and Romy Schneider at the nearby Hotel Garabit (renamed Hotel du Lac for the movie) and on the lake. The film was never completed after disputes between Clouzot and key actors and crew and Clouzot himself suffering a heart attack.

A wise man first determines what is within his control; all else is then irrelevant.  -- Epictetus