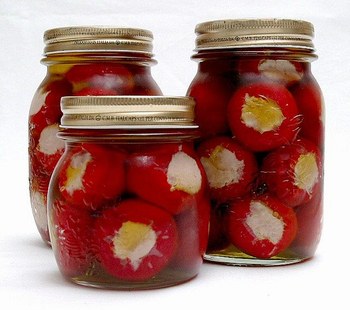 The final resultCherry peppers are about 2 inches wide and long with a medium-hot flavor that is just perfect for pickling or stuffing with cheese, tuna, or olives as a "hot" appetizer.  They also make for an excellent garnish on a dish.

They shouldn’t be thought of as merely good for pickling or for decoration, since they are quite tasty. While pickling is certainly a viable way to treat cherry peppers, consider slicing them in halves for green or pasta salads. You can use either pickled or fresh peppers for this purpose. They’re also excellent added to three bean salads, on top of pizza, or in sweet and sour dishes.

But of all the ways they can be prepared and served, my favourite one is to stuff them and put them in jars in olive oil.   I usually prepare them in september and make sure I have enough peppers until after Christmas.   Ready made jars that you can find in sophisticated food stores are very expensive, so I always prepare my own cherry hots.  It’s quite simple.

How to make them

The the ingredients are not easy to quantify, what I can say is that I usually buy 3kg of peppers, which is enough to fill about a dozen of small jars.

The procedure is composed of 3 steps:

At the end of the first step you will need to leave the peppers rest for a while, which will give you time to proceed with the following step, and then the final one.

Prepared in this way, the jars can sit in the fridge (or cellar) even for a few months.   You can open the jars and check them every now and then, becasue if you see some mould inside, then it's better to check the situation... It should not happen, if you're careful getting rid of the ari bubbles and fill the jar well, but in case you find some mould inside you might have to dump the whole jar...

How to serve them

Out of the jar, directly in your mouth, together with bread, crackers, whatever you want.  They are also served with boiled meat as a side dish but to me they are too noble to be a side dish....