My personal collection of articles about the Big Apple! 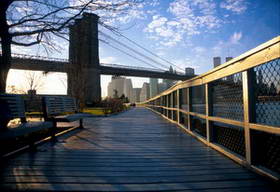 The old boardwalk, Dec 1999One of the most beautiful spots in the World !

The openings of the Brooklyn and the Manhattan Bridges, plus the rise of trucking and railway transportation, originally spelled doom for the bustling waterfront that made Brooklyn an international shipping hub in the 19th century. But by the ‘60s, much of the shipping activity had stopped and the park was opened in 1978 at the foot of the Brooklyn Bridge.

Today, nine acres of grass have replaced the gravel and dirt that covered the site a century ago. An expansive wooden boardwalk, built in 2002, now stands where piers once were, although two hulking warehouses serve as reminders of the site’s industrial heritage. Several tall trees and the Brooklyn Bridge provide shade for the sun-weary. On clear days, the park offers picturesque vistas of Lower Manhattan across the East River. 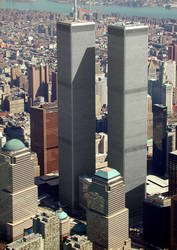 The World Trade Center was more than its signature twin towers: it was a complex of seven buildings on 16-acres, constructed and operated by the Port Authority of New York and New Jersey (PANYNJ).

The towers, One and Two World Trade Center, rose at the heart of the complex, each climbing more than 100 feet higher than the silver mast of the Empire State Building.

, abbreviated as 1 WTC and commonly known by its previous name Freedom Tower, is the lead building of the new World Trade Center complex in Lower Manhattan, New York City.

Construction on below-ground utility relocations, footings, and foundations for the building began on April 27, 2006. 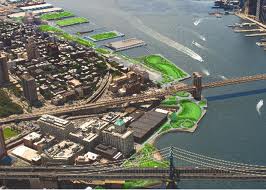 The Brooklyn Bridge Park is now a reality!

The beginnings have already become a treasured urban oasis.  Offering spectacular views of downtown Manhattan and the New York Harbor, Pier 1, Pier 6, the Brooklyn Bridge Park "Main Street lot," and Empire-Fulton Ferry section of the park have attracted thousands of visitors.  These park sections are the setting for our programs and events, as well as picnics, ball play, daydreaming and much more.

Over 20 years of community advocacy to transform the piers below the Brooklyn Heights Promenade into a vibrant waterfront park are paying off. Construction of Phase 1 began in winter 2008. Pier 1 opened to the public March 2010 and Pier 6 opened June 2010. 66% of the park is slated to be complete by 2013.