All the movies that I like and more than just like. From this blog you can get an idea of what my tastes are in this matter... 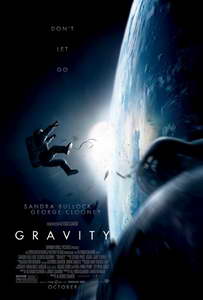 Gravity is a 2013 British-American 3D science fiction thriller and space drama film. It was directed, co-written, co-produced and co-edited by Alfonso Cuarón, and stars Sandra Bullock and George Clooney as astronauts involved in the mid-orbit destruction of a space shuttle and their attempt to return to Earth.

Cuarón wrote the screenplay with his son Jonás and attempted to develop the film at Universal Studios. The rights were sold to Warner Bros., where the project eventually found traction. David Heyman, who previously worked with Cuarón on Harry Potter and the Prisoner of Azkaban, produced the film with him. Gravity was made in the UK, where British special effects company Framestore spent more than three years creating most of the film's visual effects, which comprise over 80 of its 91 minutes.

Gravity opened the 70th Venice International Film Festival in August 2013 and had its North American premiere three days later at the Telluride Film Festival. It was released to cinemas in the United States and Canada on October 4, 2013. The film was met with universal acclaim from critics and audiences; both groups praised Emmanuel Lubezki's cinematography, Steven Price's musical score, Cuarón's direction, Bullock's performance and Framestore's visual effects. It has grossed more than US$715 million worldwide, making it the eighth highest-grossing film of 2013.

Gravity won seven awards at the 86th Academy Awards, the most for the ceremony, including Best Director for Cuarón, Best Cinematography for Lubezki, Best Visual Effects, and Best Original Score for Price. The film was also awarded six BAFTA Awards, including Outstanding British Film and Best Director, the Golden Globe Award for Best Director, and seven Critics Choice Awards. 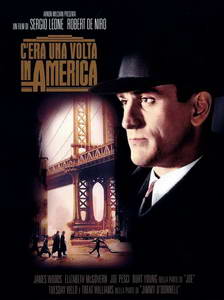 Once Upon a Time in America (Italian: C'era una volta in America) is a 1984 epic crime film directed and co-written by Sergio Leone and starring Robert De Niro and James Woods. The story chronicles the lives of Jewish ghetto youths who rise to prominence in New York City's world of organized crime. The film explores themes of childhood friendships, love, loss, greed, violence, the passage of time, broken relationships, and the appearance of mobsters in American society. 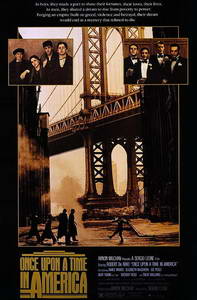 The film premiered out of competition at the 1984 Cannes Film Festival in its original running time of 229 minutes (3 hours 49 minutes). However, against Leone's wishes, it was released in the United States in a heavily edited and truncated version (almost ninety minutes shorter than the original version released in Europe). The short version eliminates the elaborate flashback structure of the film, instead placing all of the scenes in chronological order.

Once Upon a Time in America was Sergio Leone's final film.

Epic, episodic, tale of the lives of a small group of New York City Jewish gangsters spanning over 40 years. Told mostly in flashbacks and flash-forwards, the movie centers on small-time hood David 'Noodles' Aaronson and his lifelong partners in crime; Max, Cockeye and Patsy and their friends from growing up in the rough Jewish neighborhood of New York's Lower East Side in the 1920s, to the last years of Prohibition in the early 1930s, and then to the late 1960s where an elderly Noodles returns to New York after many years in hiding to look into the past... 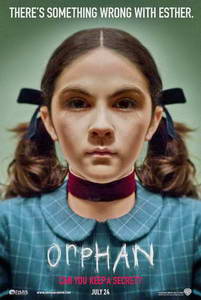 Orphan is a 2009 American psychological horror film directed by Jaume Collet-Serra and starring Vera Farmiga, Peter Sarsgaard, and Isabelle Fuhrman. The film centers on a couple who, after the death of their unborn child, adopt a mysterious nine-year old girl.

Orphan was produced by Joel Silver and Susan Downey of Dark Castle Entertainment and Leonardo DiCaprio and Jennifer Davisson Killoran of Appian Way Productions and was released theatrically in the United States on July 24, 2009.

The film received mixed critical reviews although Fuhrman's performance as Esther was acclaimed.

Esther and the ColemansKate and John Coleman are rebuilding their troubled marriage. Kate had a drinking problem, but is in therapy and is doing well. She has been sober for one year. The couple decide to adopt a child. When they meet the nine-year-old Russian girl, Esther, at the St. Marina Orphanage, they immediately fall in love with the well-educated orphan. Their young son, Daniel, is hostile to his new sister; but their deaf daughter, little Max, is enchanted with her - at first. Eventually, Kate begins to feel that Esther is manipulative and possibly even psychologically disturbed. John refuses to listen to his wife's misgivings, and the wounds in their marriage reopen. Kate calls Sister Abigail at the orphanage, and the nun informs her that Esther has a troubled and mysterious history. Kate delves further into Esther's past and discovers she is not all she pretends to be. 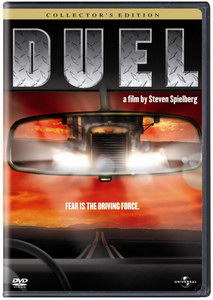 The DVDDuel is a 1971 television movie about a motorist (played by Dennis Weaver) on a remote and lonely road being stalked by a large tanker truck and its almost unseen driver. It was the first feature film directed by Steven Spielberg and was written by Richard Matheson based on his own short story.

David Mann (Dennis Weaver) is a middle-aged businessman driving to an appointment in his Plymouth Valiant. On a two-lane highway in the California desert, he encounters a faded and grimy tanker truck, a Peterbilt 281, traveling slower than the speed limit and expelling thick plumes of diesel exhaust. Mann passes the unsightly truck, which promptly roars past him and slows down. Mann passes the truck a second time and is startled when it issues a long air horn blast.

Mann soon finds himself in a bizarre cat-and-mouse game with the truck, which follows him into a gas station and begins tailgating him once the vehicles return to the highway. After Mann allows the truck to overtake his Plymouth, the truck slows and soon begins blocking Mann’s path each time he attempts to pass the truck. At one stage the truck driver waves at Mann, indicating that he can overtake, but as he does so he almost collides with an oncoming vehicle. Mann discovers an unpaved turnout next to the highway and uses it to race ahead of the truck. The truck pursues Mann again, this time chasing him at speeds of over 90 miles per hour (145 km/h) down a mountain road and bumping him several times until the Plymouth goes off the road in front of a diner.

Mann enters the diner (Chuck's Cafe) to compose himself. After returning from the men’s room, he is shocked to see the truck parked outside the diner. Mann studies the diner patrons carefully and begins an inner monologue in which he contemplates the driver’s motives and second guesses his decision to sit helplessly in the diner. Most of the patrons sitting at the bar give Mann the impression of malice, but when one leaves, appearing to approach the tanker, instead drives away in a livestock truck. Mann looks around again, trying to single out a patron, and when he thinks he has, he decides to confront him. However, the tanker's driver had never entered the diner.